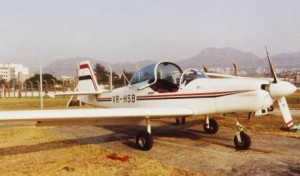 The Hong Kong Aviation Club (Sung Wong Toi Road, Kowloon, tel: +852-2711 5555, fax: +852-2761 9511) was formed as a result of a merger between the Aero Club and the Flying Club many years ago. Only dual flights are permitted for visitors, but it’s still well worth the effort for the wonderful views!

Unless you’re a member of the People’s Liberation Army (PLA) or the Government Flying Service, this is the only way to fly in Hong Kong. For many years the club operated successfully at the famous Kai Tak Airport (VHHH), in amongst the heavy airliners. As Kai Tak became saturated in the early 1990s, restrictions were gradually imposed on the club’s operations by the Civil Aviation Department, and the club eventually became restricted to only one slot a day at Kai Tak.

The other airfield in Hong Kong is Sek Kong in the New Territories. Spitfires and Hunters operated here after WWII and the RAF continued to occupy and maintain the airfield until the hand over in 1997. With the influx of Vietnamese Boat People to Hong Kong in the 1980’s, a temporary camp was set up on the (newly-refurbished) runway and so Sek Kong became unavailable for a number of years. In 1992 the camp was cleared and flying resumed at Sek Kong. Obviously the club took full advantage of this and most flying from 1993 to 1997 took place at Sek Kong.

The hand over of Hong Kong back to the Chinese in July 1997 brought more changes. The PLA flew in their small fleet of helicopters to Sek Kong and imposed further restrictions on the club. Flights may now only take place at weekends and must be booked by the preceding Wednesday. This is a great shame, but with new airports opening at Zhouhai, Macau, and Shenzhen, the club is looking at other options for the future. Kai Tak itself closed in 1998 on the day that the new airport, Chek Lap Kok, opened.

The club’s fleet consists of a C152, an Aerobat, three C172s, a C182 and a pair of aerobatic Slingsby Fireflys. Flying isn’t cheap (fuel tax is very high in Hong Kong), with rates for the C152 starting at around HK$1100 (US$140) an hour. In exchange for your hard-earned money, though, you will experience the magnificent views of Hong Kong from the air. A typical sight-seeing flight will take you from Sek Kong out to the East around the coast of the New Territories, from there towards Hong Kong harbour and Hong Kong Island then back North towards Sek Kong. A flight down the harbour at 500 feet, quite a long way below the tops of the skyscrapers, is quite spectacular. Take plenty of camera film, you’ll need it!

With all the restrictions on light aviation in Hong Kong at the moment, it would be wise to book well ahead if you’re planning to fly while you’re there. The full time instructor is Peter Wells, and he’ll be able to give you the latest information and prices.